6-day, 6-night tour to visit emblematic sites of French waterways, from Paris to Grenoble via Dijon and Annecy, including the two barge capitals of Conflans-Sainte-Honorine and Saint-Jean-de-Losne, September 19-25, 2022. The tour is led by David Edwards-May and is designed to appeal to members of Inland Waterways International.
Full price per person €980 in twin/double room. Total additional costs €95.

A special tour to discover a series of emblematic sites on French waterways and lakes, from Paris to the tour provider’s home town of Grenoble, European Green Capital 2022. Monday 19th to Sunday 25th September, 2022. Nights in Paris and Dijon, two nights in Annecy and two nights in Grenoble. The diverse tour includes four boat trips, one through the 3.3 km long Pouilly tunnel on the Canal de Bourgogne, and a unique narrow-gauge railway excursion. The tour is organised by David Edwards-May for members of Inland Waterways International. Enjoy the company of an enthusiastic and motivated international group. The price per person is €980. The single supplement is €220 (separate product). 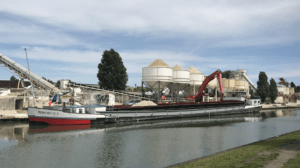 Assemble in Paris by 14:30 at the Tim’hotel (formerly Villa Saint-Martin) in rue des Récollets, close to the Gare de l’Est and the Canal Saint-Martin. After check-in, depart 15:00 for excursion to see commercial use of the Paris canals, intensified since construction of the Stade de France and now construction of the Grand Paris Metro Express. Walk to the Bassin de La Villette to embark on Canauxrama vessel. Cruise on the Canal de l’Ourcq to Pavillons-sous-Bois and back. Dinner in the excellent brasserie opposite the Gare de l’Est.

Barge unloading construction materials on the Canal de l’Ourcq in Bondy, a northeastern suburb of Paris 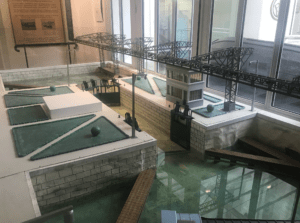 After breakfast, check out but leave luggage at the hotel. Métro and RER to Conflans-Sainte-Honorine to visit the Musée de la Batellerie et des Voies Navigables. The overall presentation by distinguished waterways historian Bernard Le Sueur will be given outside the museum. The superb château overlooks the Seine. One of many fascinating models and exhibits in the Museum is the model of an elaborate barge-towing system erected at Janville lock on the Canal lateral à l’Oise, nicknamed the “zinzin” or thingummyjig. There is also a massive model of the Fontinettes boat lift. Free time for a late lunch on the quayside in Conflans-Sainte-Honorine (a short walk down the hill). Walk back up to the station and return to Paris. Pick up luggage at our hotel. Métro to Quai de la Râpée, walk to Gare de Lyon for TGV to Dijon, departing 17:28.
Walk 500m to Logis Hotel Darcy in the centre of Dijon. Dinner on your own. Night in Dijon

Model of the ‘zinzin’ at Janville, one of the many fascinating exhibits in the Conflans-Sainte-Honorine Museum 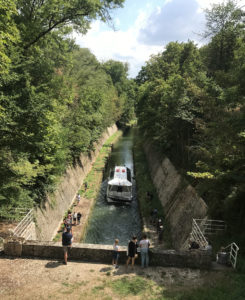 Check out to board our coach for the day. First stop Pouilly-en-Auxois, on the summit level of the Canal de Bourgogne, Visit the former tug in its unusual bamboo structure shed.

Board the passenger boat Billebaude for the cruise through the entire summit level including the 3333m long Pouilly tunnel. Disembark in the basin at Escommes at the Saône end. Reboard coach and proceed to Saint-Jean-de-Losne for lunch on the quayside, beside the Gare d’eau. Note in passing the newly refurbished lock 75 of the Canal de Bourgogne at Saint-Jean-de-Losne, France’s second barge capital after Conflans Sainte-Honorine. A few kilometres away, after lunch, brief stop at the nearby commercial port of Pagny-le-Château, the northernmost point of the high-capacity Rhône-Saône waterway.

Transfer to Mâcon-Loché TGV station, to catch the 18:25 train for Annecy. Arrive 20:15. Walk 800m to Hôtel de Savoie, where we stay two nights. (On your own for dinner, as some will have preferred to have a simple dinner or snack in the TGV.)
Night in Hôtel de Savoie at Annecy

The Billebaude exits the Pouilly tunnel at the southern end.

Board coach (without luggage) 8:40 for the transfer to Chanaz, a charming town on the Canal de Savières. Cruise with the local operator Bateau Canal, embarking at 10:00

The cruise starts by passing through the lock at Savières to enter the Upper Rhône, to which we return later by coach. Back into the canal and through to the northern end of Lake Bourget, the biggest lake in France. The boat will pass the Lamartine statue and the village of Châtillon on the northern shore before returning through the canal to Chanaz.
Lunch in a quayside restaurant in Chanaz.
Short coach transfer to the site of Brens, where the Compagnie Nationale du Rhône built a bypass 12 years ago including two locks, each 9m deep, and an intermediate basin. Presentation of the Upper Rhône project and the works that remain to be completed for the waterway to be connected with the main system in Lyon.
Return to Annecy via Aix-les-Bains.
Supper in the Brasserie L’Étage on the boulevard close to the hotel
The two-lock bypass at the Brens hydropower plan built by the Compagnie Nationale du Rhône in 2010 (photo © CNR)

Visit the Château overlooking the old town and the lake and/or free time to visit Annecy.
11:00 Board coach with luggage for transfer to Grenoble, European Green Capital 2022.
Check into Hôtel d’Angleterre on Place Victor Hugo, in the city centre.
Lunch in a brasserie Place de Gordes or Jardin de Ville (depending on the weather).Guided walking tour of the city centre, including the Musée de Grenoble (biggest art collection in France outside Paris), the Musée de l’Ancienne Évêchée and the vestiges of the 3rd century baptism font discovered when tram Line B was built, the Isère and the Saint-Laurent suspension bridge, and the Jardin de Ville where author Stendhal lived. History of the river Isère as a navigation, until the parallel railway line was opened.
Late afternoon, take the téléphérique to the Bastille, towering 260m above the city. Time to enjoy many facets of the site, possibly walking through to the caves that were part of the fortifications, until dinner in the Restaurant du Téléphérique.
Return via the Téléphérique in your own time. Short walk to the Hôtel d’Angleterre. 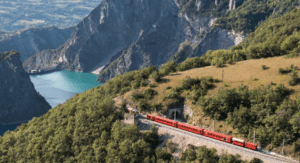 Depart by coach for La Mure, terminus of the Petit Train de La Mure, electrified narrow-gauge coal-carrying railway line, with its spectacular engineering and scenery, overlooking the gorge of the river Drac. Part of the line collapsed 8 years ago, and it has just been restored and reopened.
Lunch in the bistrot beside the station serving the main viewpoint. Return to La Mure.
Transfer by coach to Mayres-Savel on Lake Monteynard, for a last boat trip in a unique mountain environment, passing under two Himalayan footbridges.
Back to Grenoble
Farewell reception 11 bis Cours Berriat.
Night hotel in Grenoble

The breathtaking scenery of the Petit Train de La Mure, perched high above the Lac de Monteynard in the Drac gorges .

End of tour. Additional visits and excursions will be recommended for those who can extend their stay.

The price per person of €980 includes 4 boat trips, 6 nights B&B, 4 lunches and 4 dinners, TGVs from Paris to Dijon and Mâcon to Annecy, coach transfers and the two visits to waterways museums.

Additional costs €95 (cost overruns on boat in Paris and dinner in Grenoble, plus boat trip on Lake Annecy)